Correctness and the Loop Invariant

In the previous challenge you wrote code to perform an Insertion Sort on an unsorted array. But how would you prove that the code is correct? I.e. how do you show that for any input, your code will provide the right output?

Loop Invariant
In computer science, you could prove it formally with a loop invariant, where you state that a desired property is maintained in your loop. Such a proof is broken down into 3 parts:

Insertion Sort's Invariant
Say you have some InsertionSort code, where the outer loop goes through the whole array A:

You could then state the following loop invariant:

At the start of every iteration of the outer loop (indexed with i) the subarray until ar[i] consists of the original elements that were there, but in sorted order.

To prove Insertion Sort is correct, you will then demonstrate it for the three stages: 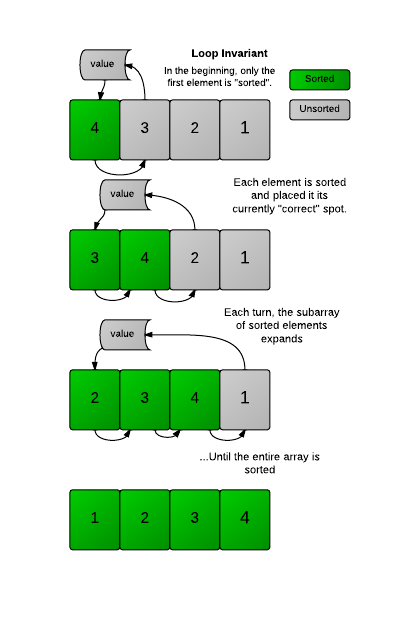 You can often use a similar process to demonstrate the correctness of many algorithms. See these notes for more information.

What would be a correct loop invariant for the following code?