Computers can do many things nowadays, from playing Jeopardy to driving cars, but they ultimately just do a few simple operations on binary numbers:

Computers are able to perform these operation with simple logic gates that are similar to the physical switches and relays used in the earliest computers.

A Logic gate works by producing a specific binary output for a given input. All input and output is just 1's and 0's. For example, the "AND" gate only outputs 1 if both its inputs are 1's. This can physically be created by putting 2 switches in a row: 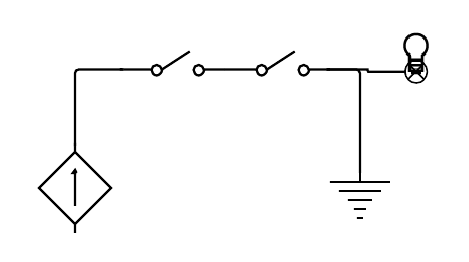 Other input wires or electromagnets control the 2 switches. Only when both switches are closed (an input of 1) will the above gate output 1. (See simple animations of logic gates here.)

Logic gates are combined together to produce calculating devices and are the fundamental physical logic of a computer. You could even build your own calculator by combining together enough logic gates.

CPU
The CPU is "in charge" of the actual computation a computer does, and it uses an Arithmetic unit built with logic gates to perform the actual operations. It also has a control unit which manages the flow of bits around the CPU. Below is an animation from Virginia Tech of the CPU at work getting data and adding it together.