This page discusses the different popular programming languages and help you choose one to learn. You shouldn’t worry too much about which language you choose, since the basic programming fundamentals are the same in each one. But you might as well pick the language that fits best with your goals. You can look at this chart to get an overall idea and read below to find out more about a language. 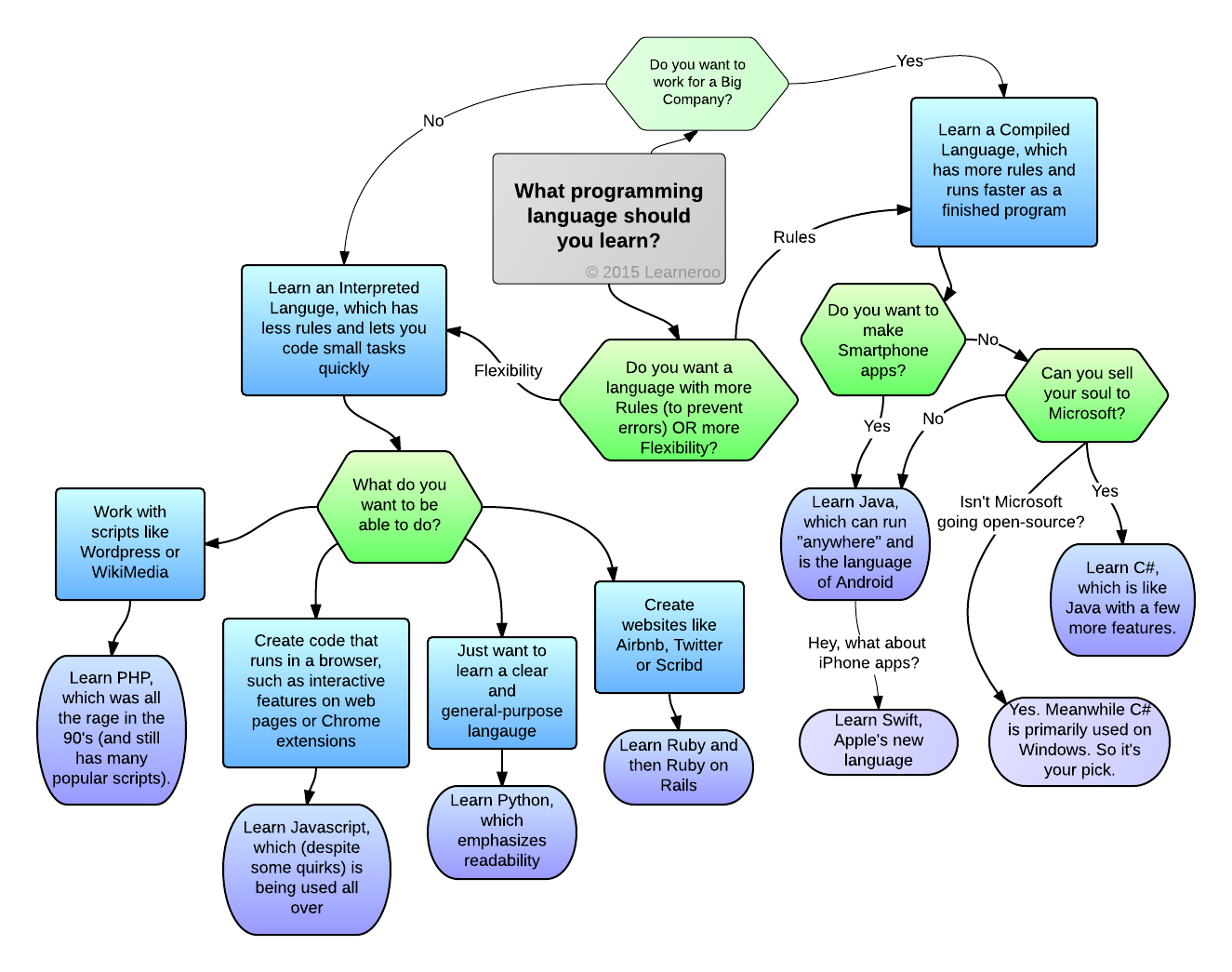 Java and C# are two very similar programming languages that are well-optimized and have stricter rules to help prevent programming mistakes. Code in these languages need to be “compiled” into lower-level code before it runs, and all variables need to be “declared” with their name and type. They also enforce/encourage a methodology known as “object-oriented programming”, requiring all code to belong to an “object”.

People who program in these languages use an IDE to write their software in, which can provide various features to help with programming, such as auto-completion suggestions while they code, and automatic highlighting of certain errors. The rules in these languages will help you detect certain errors before you even run your code, which can be especially helpful when learning programming. However, Java or C# are not made for writing simple scripts, and they are not as popular for quickly creating dynamic websites.

Java vs. C#
Both languages are popular in large companies, large projects and in projects that need optimized code.

Java code does not get directly converted into machine code. Instead it runs on a "virtual machine" which can run on all sorts of different hardware. This lets Java fulfill their slogan of "Write once, run anywhere". Java was once intended for widespread use on web browsers, but that is less common and a very different language is used for that (JavaScript). It is used in regular desktop applications, but its most popular consumer use is for creating Android apps. In large companies it is used both internally and to power their websites. It is also commonly taught in colleges.

C# can be called "Microsoft's Java", but it also has features missing in Java. It does not yet support multiple platforms as well as Java does, but it does fit well with Microsoft's other offerings. If someone is within a Microsoft world anyways, it likely makes sense to use C# over Java. Microsoft has started to open-source C# and associated technologies, so support for other platforms will improve over time.

In summary, you should learn one of these languages if you:

You should likely do C# if you'll just be doing things on Windows, but you should do Java if you want to make Android apps or are going to a college that does Java.

Interested in learning Java? Check out our course Learn programming with Java.

The "interpreted languages" are more flexible, and are probably a better choice for a beginner who doesn't care about the reasons mentioned above. Since they're popular on the web, I’ll quickly review how websites work before going through different languages. (For more information see Intro to Web Development.)

When you view a website, a central computer called a server sends you a web page through the internet. Sometimes, they just send a static page that was sitting there on the server, but on modern sites, the page is often dynamically created for you. That means some code was being run on the server (the “back-end”) to generate the page that it sent over to you. Websites can use any language on their back-end that is supported by their web host. The page that gets displayed is formatted in static HTML (a markup language), but it can contain JavaScript that runs in the browser which allow it to do many more things.

Since JavaScript runs in all browsers, it can be a good choice of language to learn. No installation is required, since it can immediately be tried out in the browser. JavaScript can be used for visual effects, but also for doing things without having to update the entire webpage. Modern web apps require JavaScript for many of their features. (For example, try loading Gmail without JavaScript.) JavaScript is also used in many web-related areas, such as creating browser extensions. It is often used for other areas that beginners might be interested in, such as creating AppScripts to work with Google Apps. If you are interested in doing any of these things, Javascript may be a good language to learn. However, Javascript has certain confusing parts, so if you’re not planning on using it for the above purposes, you can try a more elegant language such as Python.

PHP is a language built for creating dynamic web pages, and it runs on the server-side. Let’s say you just finished building a website without programming and now you want to be able to customize things further. You want to learn how to program the brains of the website, i.e. the back-end. A large number of websites and scripts are built using PHP, and web hosts often come with a list of one-click-install scripts. If you want to create a plugin for WordPress or work with the same script that runs Wikipedia, then PHP is for you. Practically all dynamic web hosts run PHP, and its very easy to get started with it. However, PHP has some issues, such as a messy syntax and certain inconsistencies and quirks. This means you should probably learn a different language if you just want to learn programming or you want to create an entirely new web app. However, PHP has improved over time, and if it fits your purposes, go ahead and learn it.

If you just want an easy and elegant language to learn programming, Python is a good choice. Unlike PHP and Javascript, which are made for the web, Python is a general-purpose language that is often used outside of websites. Python aims to be very readable, so even a beginner could figure out what some simple Python code accomplishes. Python has the unusual feature of using indentation to mark different parts of code. This makes the code look less cluttered, but can sometimes cause issues when copying code. Python is a good choice to go with if you don’t have a specific goal that fits with one of the other languages.

Ruby is similar to Python in many ways. It is a general-purpose language which is focused more on programmer productivity than running-time on a machine. This ‘slowness’ isn’t really an issue for most things a beginner will be building. Ruby has become popular in the last few years due to the website-building framework written in it – Ruby on Rails. Rails developed certain principles (such as “convention over configuration”) that let programmers built websites quickly. If you are interested in creating websites with Rails, then it obviously makes sense to learn some Ruby. While Rails can be used without that much Ruby knowledge, I think a beginner should first learn a simple language before taking on a complex framework.

Interested in learning Ruby or Rails? Check out our course Web Development with Ruby on Rails.

The C language is the 'grandfather' of modern languages, and it (and C++) influenced many languages, especially Java and C#. Many lower-level systems (and language compilers themselves) are written in C, but a beginner should usually learn an easier higher-level language for creating applications.

Objective-C (which appeared in 1983) is Apple's variant of C for creating apps for Macs and iPhones. It still requires programmers to do certain things that modern languages take care of automatically. Apple recently came out with Swift, as an easier alternative to Objective-C. Swift offers various beginner-friendly features, such as playgrounds for seeing your code execute live. Swift is a good choice if you're interested in creating iPhone apps.

Just out of curiosity, what language are you planning on learning?