Method Basics
The header of the method declares what the method will return (such as an int), the method name (doStuff), and the method's parameters (such as a and b). The method body follows, where you usually need to write code that returns a value at the end. Load Method
Syntax note: Every line of code in Java needs to end with a ; or it will be considered part of the next line. Comments are marked with 2 backslashes // and are ignored by the computer.

Variables and Data types
Variables need to be declared with their type before they can be used. You can declare and assign a variable on one line: int num = 5; Load Code

Operations Booleans and Logic
Math operations are performed in the standard order. Note that division of integers will round down to nearest integer. The mod % operator returns the remainder after division. booleans are used to store true/false values, such as the results of comparisons: The logical operator AND && will return true if multiple conditions are all true, and OR || will return true if at least one condition is true.
if else and while
The if statement will execute code only if a condition is true: Load If Statement
The else statement will execute code if the condition was false. The while statement will repeatedly execute the same code while a condition is true.
Printing and Arrays
Print a newline
System.out.println(""); Load Print Statement
The above prints text and add a newline afterwards. System.out.print prints without a newline, but you can add in spaces " " to separate text. Arrays are used to store multiple items of one data type together. They are declared with the type they will hold and with brackets [].
This code creates an empty 5-cell array:
int[] ar1 = new int[5]; Load Array Code
This shortcut creates an array with numbers 0 to 4:
int[] nums = {0,1,2,3,4}; Load Code
You can use for-loop to print values of array: Load Code

A variable in programming is like a container which holds a value:

In Java, you need to declare all your variables before using them. That means you simply state its type and name:

In this case you declared a variable called num, which can hold an int or integer.

Once its been declared, you can assign it to a value: 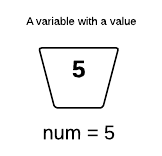 You can also combine these steps:

You can change the value of a variable at any point:

But in Java it cannot be set to the wrong type: 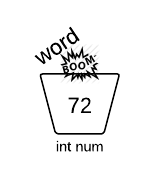 Since num was declared as an int, you cannot assign it the String "word".

In the previous challenge (and future ones), you coded a solution within a piece of code known as a method:

A method is a block of code that can be called by other code. In this example, the code at the bottom (that we said you could ignore), calls the method doStuff and it does stuff. By putting pieces of your code into method blocks, you can keep things organized, and you can call the same code multiple times from different parts of your program.
Note that you will usually want to name your methods with a more descriptive name than "do stuff".

In many cases, methods can be used like parts of a logical flowchart seen in Algorithm ways. 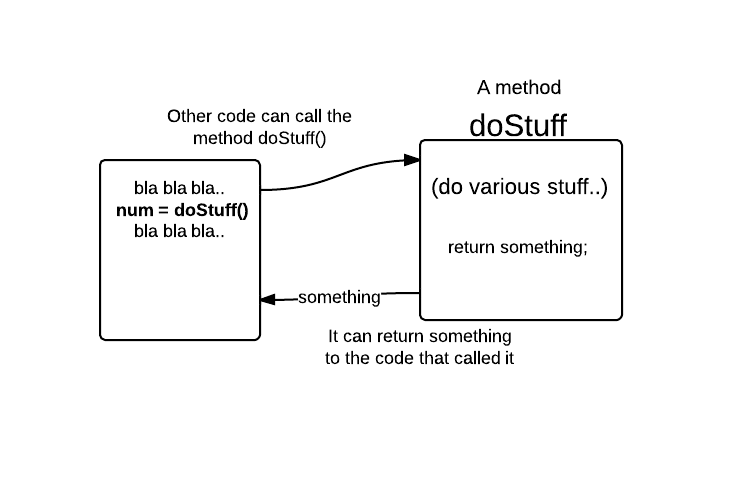 Look at the top of that method again: 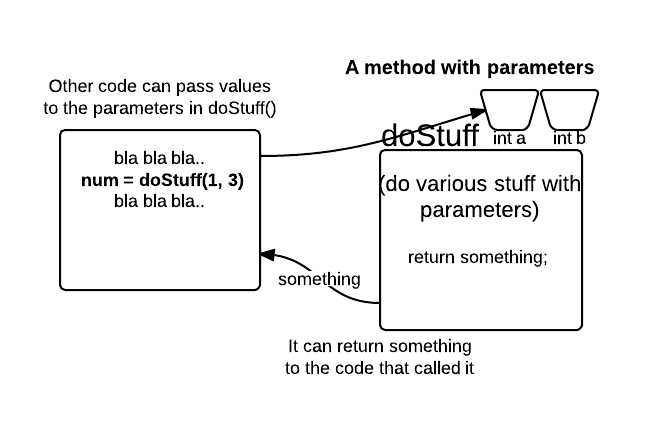 So other code can pass two numbers to doStuff to do stuff with. In this example, it will add two numbers, so: 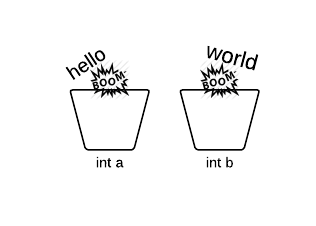 In the challenges on this site, the code on the bottom of each challenge passes in numbers to the method doStuff (which get assigned to the parameters a and b). You need to fill in doStuff so it "does something" with a and b and returns the correct answer to the code that called it.

As in the previous challenge, you will be given the method doStuff which takes in two parameters a and b. (You should replace //your code here with your own code.) For this challenge, you are to return the average of the two numbers, rounded down to the nearest integer.

Guideline: Create a new variable to store the sum of a and b. To get the average of the two numbers, simply divide that sum by 2 with /, and return that result. / will automatically round the answer down.

Return the Average of any two integers, rounded down.

Declare an integer variable age and assign it a value of 22 in one line of code.