Method Basics
The header of the method declares what the method will return (such as an int), the method name (doStuff), and the method's parameters (such as a and b). The method body follows, where you usually need to write code that returns a value at the end. Load Method
Syntax note: Every line of code in Java needs to end with a ; or it will be considered part of the next line. Comments are marked with 2 backslashes // and are ignored by the computer.

Variables and Data types
Variables need to be declared with their type before they can be used. You can declare and assign a variable on one line: int num = 5; Load Code

Operations Booleans and Logic
Math operations are performed in the standard order. Note that division of integers will round down to nearest integer. The mod % operator returns the remainder after division. booleans are used to store true/false values, such as the results of comparisons: The logical operator AND && will return true if multiple conditions are all true, and OR || will return true if at least one condition is true.
if else and while
The if statement will execute code only if a condition is true: Load If Statement
The else statement will execute code if the condition was false. The while statement will repeatedly execute the same code while a condition is true.
Printing and Arrays
Print a newline
System.out.println(""); Load Print Statement
The above prints text and add a newline afterwards. System.out.print prints without a newline, but you can add in spaces " " to separate text. Arrays are used to store multiple items of one data type together. They are declared with the type they will hold and with brackets [].
This code creates an empty 5-cell array:
int[] ar1 = new int[5]; Load Array Code
This shortcut creates an array with numbers 0 to 4:
int[] nums = {0,1,2,3,4}; Load Code
You can use for-loop to print values of array: Load Code

While and For Loops

As mentioned in How Computers Calculate, computers ultimately just do a few very simple operations. They have so much power because they can do the same operation any number of times. A programmer can get a computer to do repeated tasks by using loops.

The While Loop is the only loop you really need, the other loops just make things more convenient. A while loop will repeatedly execute a block of code while a condition is true. The syntax is like an If-Statement, but with a while instead of an if:

For example, you might want to run a game as long as a player still has lives:

Let's say you wanted to doSomething 10 times. You could use a While Loop to keep track:

The above loop will increase index and call doSomething() 10 times, but then stop once index is greater than 10.

The algorithm to get the largest number in a list (seen in Ways to show Algorithm) can also be coded with a while loop: 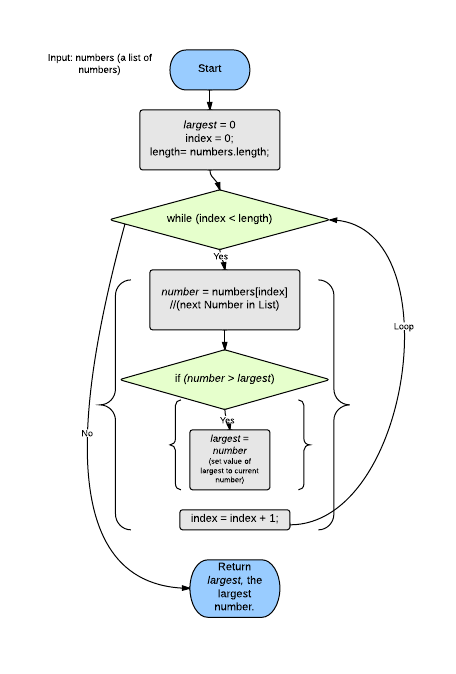 
You don't need to understand every detail of this code, but notice how the while loop uses an index to go through a list of numbers. At the end of each loop index is increased by 1, so once it has gone through all the numbers index will equal length and the loop will stop.

This works fine, but if you forget to increase the index or make some mistake in the condition, the loop can go on forever and you will need to stop the running of the program.

Many while loops involve setting up a variable and updating its value until a certain condition is reached, when the loop will terminate. Such loops can be replaced with For Loops, which is more compact and helps prevent eternal looping errors. It does this by combining the index, condition and updater in the header of the loop.

This is the general form of the for loop:

The for loop header consists of 3 parts:

For example, let's say you wanted to improve the above while loop to doSomething 10 times. Its used an index variable that it incremented each loop until it reached a certain value, so it could be replaced with a for loop:

(hover above for more info)

This will call the method doSomething 10 times.

The while loop to find the Largest Number can be shortened by using a for loop instead:

It is the same as the previous code, except the lines to set up and increment the index have been combined into the for loop header:

Note that the action in the for loop can increase or decrease the index by any amount. Although you never need a for loop, you should use it instead of a while loop when possible, since it helps avoid errors.

When the following loop terminates, what will num equal?

You will be given two numbers a and b. Print out every number from a to b (inclusive). a will always be less than b.

Since we haven't covered printing yet, you can use the included printNum() method to print a number. Just pass it whatever number or variable you want to print. For example,this code will print 5:
printNum(5);