The Code for Creating and Using Objects

Previously, you created Objects and called their methods using BlueJ's visual interface. When you did this, BlueJ would create and execute code that corresponded with your action.

To view the actual code that gets created you just need to:

You can now repeat the same actions that you did in Objects in BlueJ, but this time you can see what code gets created:

When you're done, you should see something like this: 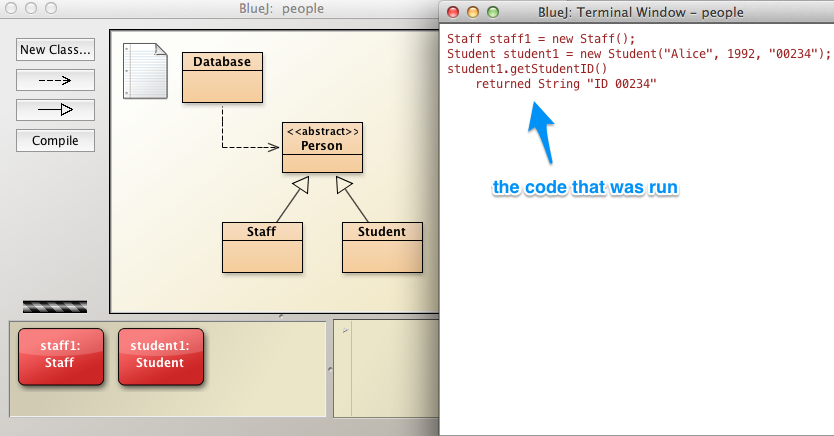 Let's find out what these lines of code mean!

In the previous module you saw how to declare variables and assign them to values. For example you could type:

Or alternatively you could declare and assign it in one line:

You can do a similar thing when creating Objects. You declare the type and name of the Object variable:

Note that instead of declaring a primitive type (like int), you declare the Class (with a capital letter) that the Object belongs to.

Once you declared an Object variable, you can assign it an object:

This is something new, since you are creating a new Object. This is done with the new keyword. The staff1 variable will now point to this new Staff Object.

The declaration and assignment can again be done in one line of code, even though it now includes creating and setting up an object: