The Picture Class you created may look nice, but it doesn't do much besides create a static picture. In Object-Oriented Programming, you can have Objects interact with each other to do more exciting things than just sit there. For example, it would be cool if you could change the colors or move multiple Objects with one action. Currently, your code probably looks like the code below, where each Object is created and then forgotten:

The Circles are created, but they won't be available to other methods in your program. In fact, if you inspect your Picture Object on the bench, you'll see it has nothing to show. This is the first thing that should be fixed.

The Picture cannot do anything more yet, but at least it now has some accessible data. If you inspect a Picture Object again, you'll now be able to see (and inspect) each instance variable you created: 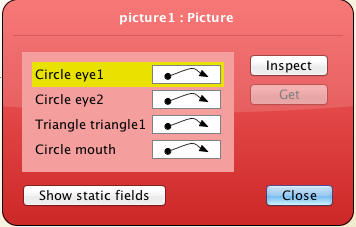 Now that Picture's shapes are accessible, you can create a method that changes the color of all its Circles:

You should now be able to create a Picture and change the colors of all its circles at once.