In the previous node, you used the Circle Class without touching any of its code. In this node, we'll look at its actual code and make some changes.

This is the beginning of the Circle Class: 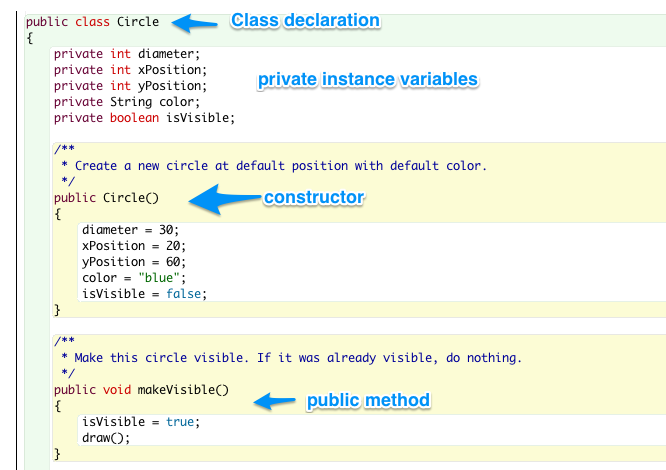 Below the Class declaration, the instance variables, which hold data about the Object and are available to all its code, are declared. In this case, they store information about the position and appearance of the Circle.

The constructor appears under the instance variables and is used to set up their initial values. A constructor is just a method with the same name as the Class that runs when an instance of the Class is created.

Currently, Circle's constructor just assigns hard-wired values (like a diameter of 30) to the variables, instead of allowing the variables to be set. Also, the Circle is not visible when created, but requires another call to the method makeVisible() to show up.

Constructor Task
It would be useful if you could set different initial values for the Circle. Create a new constructor that takes in parameters to set the values of diameter, xPosition, yPosition and color. To make the Circle visible on creation, call makeVisible() at the end of the constructor.